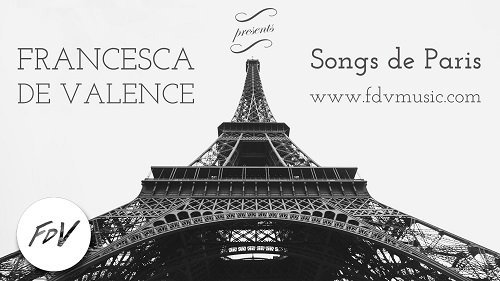 Much-loved Australian singer-songwriter Francesca de Valence set off on a solo voyage of discovery in 2017: a month in Paris, the City of Light, the City of Love. She took an empty notebook and an open heart and found her muse in both, connecting with her patriarchal French heritage and writing her show ‘Songs de Paris’.

After sell-out concerts in Australia in early 2018, she returns again for  Paris in the springtime. Another season, another colour, another light, another musical commentary on the city that has stolen her heart. Dancing between Australia and Paris playing shows in creative nooks and nests, ‘Songs de Paris’ continues to evolve. This intimate solo concert with projected images is an absolute delight and a joyous celebration of Paris told through the eyes of a new lover, a foreigner and a woman.

Francesca presents this concert at her favourite cellar door in the Granite Belt, Pyramids Road Wines. The award-winning boutique winery have just released their new vintage Strange Bird varietals – Verdelho, Mourvèdre and Petit Verdot – adding to the French flavour of the evening. They were also recently awarded a Certificate of Excellence from TripAdvisor.

As the sun sets on August 4th, the fireplace will be rolling, the wines will be flowing, dinner will be made for you as well as this special concert – made in Paris.